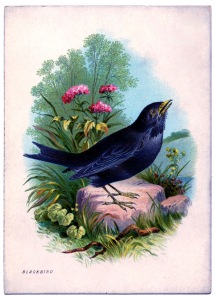 Blackbird singing in the dead of night, take these broken wings and learn to fly, All your life, you were only waiting for this moment to arise……..

Some years ago whilst recovering from a rather nasty period of ill health (nothing madly serious but enough to send me a wee bit bonkers) I suffered from the kind of malaise that almost sucked the life out of me, every morning I would do my usual routine of going into my beloved garden and wandering, round and around, back and forward, not finding joy in the pert buds of my English roses, nor basking in the scent of Summer flowering Geraniums, not even feeling my usual bliss as the swaying purple Lavender tickled my legs. I was lost.

Summertime has always been my very favourite Season, the garden comes alive, I love the chaos of everything fighting for sunlight in order to bloom to their full potential, yet I remained untouched.

At the bottom of our garden stands a beautiful Magnolia tree. That Morning standing before the almost luminous pink petals, soft and still, my thoughts were interrupted by a sound. Movement. My Heart began to quicken, the garden was silent and still, but suddenly I was aware of being watched, in the center of the Magnolia tree, sat a small fluffy bird, eyes like saucers, his chest rising and falling with each nervous breath. A fledgling, a baby Blackbird.

I fell instantly in Love, this little Bird seemingly couldn’t fly,( you and me both Birdy) what should I do?, I retreated back to the house softly and watched from a distance, very soon Mama and Papa Blackbird appeared bringing food, I watched, almost afraid to move as they fussed over Birdy, watching him eat before leaving.

Over the following days, I visited him often, aware always of the watchful eye of his parents, slowly he appeared to be making his way out of the Magnolia Tree into various other shrubs, he was just so beautiful. I looked forward eagerly every Morning to see my little guest, tiptoeing out to leave tidbits in order for his parents to find food easily. As the days went on, Birdy became stronger,as did I, though often panic set in when I couldn’t see him because he had ventured farther afield!

Then one sunny Vanilla coloured Summer Morning as I stepped barefoot into my garden, I knew, I just Knew, Birdy was nowhere to be seen, he had found his wings and flew off into the big wide world. I at once felt sad that he had gone, yet happy for his flight to freedom.

Nature is the greatest Teacher I find, it reminds us that life goes on and at times when we feel stuck, with a little gentle encouragement from our loved ones and the helping hand of a stranger, we can all learn to grow and fly.

Some weeks later, I was looking out of the window, sitting on the fence very close to the house, was a rather handsome young Blackbird, head tilted and looking in! could it be? I chose to think so.

Hello! My name is Gena King I am a married Mum to two beautiful Daughters, I live in the North east of England where I teach and practice Reiki, read Tarot and write, I love to blog so please hop over to the page and take a look at my world. I am so thrilled that you have found my website, I look forward to interacting and taking this healing journey with you.